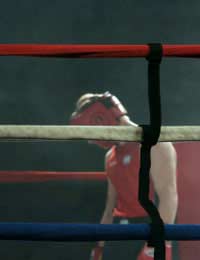 The noble art of boxing is one of the most illustrious sports at the Olympics and has produced a string of legends, although it is perhaps surprising that a sport introduced to the ancient Games in the late 7th century BC has not been an ever-present at the modern Olympics.

There is evidence that boxing took place in Egypt around 3000BC. When the Greeks incorporated it in the ancient Games, boxers bound their hands and forearms in soft leather for protection and the fight continued until one man went down or conceded. The Romans added a gladiatorial dimension, replacing the leather binding with the cestus, a battle glove studded with spikes or weighted with lead, and fights usually ended in death.

Much later, in 17th century England, reference to matches can be found and organised amateur bouts began in 1880. Originally only three weight classes were contested and boxing was omitted from the first modern Olympiad in 1896 because it was considered too dangerous. It was introduced at the 1904 Games in Saint Louis and the USA won all seven weight divisions - not surprising as the Americans were the only nation to enter.

Sweden's national law prohibited boxing, so it was not on the programme for the Stockholm Games in 1912, but it returned in 1920 and has been part of every Olympics since.

Boxers fight in an elimination tournament at the Games and are paired off at random, with no regard given to ranking. Unlike most Olympic events, bronze medals are awarded to both losing semi-finalists.

Qualifying for the Games

Regional qualifying tournaments are held in Africa, the Americas, Asia, Europe and Oceania to allow boxers to qualify for the Games. The strength of boxing in the region dictates the number of boxers accepted from any region and this varies according to weight division.

Since the 1952 Games in Helsinki, both semi-final losers have been ranked as placing third. In 1952 the third place finishers were awarded diplomas, but since 1956 bronze medals have been presented.

At the 1984 Games in Los Angeles, head guards became compulsory wear, while in 1992 an electronic scoring machine to make judges' officiating more objective was introduced. Only blows registered within one second by at least three of five judges are now taken into account.