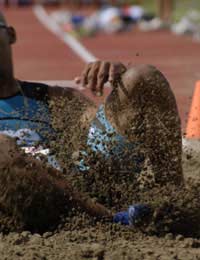 The USSR blamed anti-communist demonstrations in America for their non-participation at the 1984 Games in Los Angeles, claiming the safety of Soviet athletes could not be guaranteed. East Germany, Cuba, Poland, Bulgaria, Czechoslovakia and Ethiopia were among 17 boycotting nations that between them had taken 58% the gold medals in Montreal.

The men's 100m final is considered the blue riband event of any Games and the race not only defined the Seoul Olympics of 1988, it also tarnished them. Canadian Ben Johnson won in a world record 9.79secs but then tested positive for the anabolic steroid Stanozolol and was stripped of the title and time. Silver medallist Lewis was promoted to gold.

American sprinter Florence Griffith-Joyner won three golds - the 100m (10.54), 200m in a world record 21.34 and 4x100m (41.98) - and although her bulked-up physique and deeper voice fuelled speculation of steroid abuse, Griffith-Joyner never failed a drugs test. She died in her sleep aged 38 after a form of epileptic seizure.

Germany's Steffi Graf, who had won all four Grand Slam tennis tournaments in 1988, added gold at the Olympics as tennis returned to the Games after a 64-year absence.

A record 169 nations participated in the Barcelona Games of 1992, and professional athletes were admitted for the first time. It allowed the USA dream team led by Earvin 'Magic' Johnson to light up the Games on the way to Olympic glory.

Two black athletes stole the show at the 1996 Games in Atlanta, the birthplace of Martin Luther King. American Michael Johnson won the 400m in 43.49secs and three days later added the 200m title in a world record 19.32. France's Marie-José Pérec completed the same double and in the process became the first athlete, male or female, to retain an Olympic title at 400m.

Lewis won the long jump title for a fourth consecutive Games, giving him a ninth Olympic gold medal at the age of 35, while, in the pool, Russian Aleksandr Popov retained the 50m and 100m freestyle titles he had won in Barcelona, becoming the first man to retain the 100m title since Johnny Weissmuller in 1928.

A record 79 of the 197 participating nations won medals and Austrian yachtsman Hubert Raudaschl became the first athlete to compete in nine Olympics.

The new millennium began with a record-breaking Games in Sydney, featuring 199 nations, 300 events, 10,651 athletes and the biggest Olympic stadium yet, the purpose-built, 110,000-seater Stadium Australia.

The Atlanta Games had suffered from poor organisation, but there were no complaints in Sydney as legendary British rower Steve Redgrave won his fifth gold medal in five Games, winning the coxless fours with James Cracknell, Tim Foster and Matthew Pinsent.

Cathy Freeman was the home-grown hero, winning the women's 400m for Australia and the Aboriginal community, while Ethiopia's Haile Gebrselassie retained his 10,000m crown. In the pool, Australian Ian Thorpe won two titles in the space of an hour, both in world record times - 400m freestyle (3:40.59) and 4x100m freestyle relay (3:13.67). He later added a 4x200m freestyle relay gold. Holland's Pieter Van den Hoogenband won the 100m and 200m freestyle double.

Olympics 1900 to 1920
Share Your Story, Join the Discussion or Seek Advice..
What was the name of the Black British chap who totally dominated his field(post-Thatcher Prime Ministry,I think)?As a Yank,I naturally wanted an American to win,but felt only a little less joy when a Brit ally won(rue a USSR medallist!).Thought that with his persona,size, and handsomeness, he could have portrayed James Bond excellently.
Jim - 17-Sep-15 @ 7:57 PM
Title:
(never shown)
Firstname:
(never shown)
Surname:
(never shown)
Email:
(never shown)
Nickname:
(shown)
Comment:
Validate: