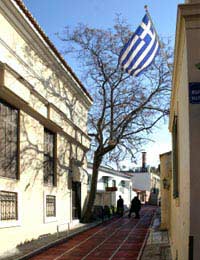 In 2004, the Games returned to Greece, home of the ancient Olympics and host of the first modern Olympics 108 years earlier. As in 1896, Athens was the host city and the Greeks ensured the history of the Games was remembered.

A record 201 nations participated in a record 301 events, reaching a potential television audience of 3.9 billion. Moroccan middle distance runner Hicham El Guerrouj became the first man since Finn Paavo Nurmi in 1924 to win both the 1500m and 5,000m, while Brit Kelly Holmes clinched the women's 800m and 1500m titles.

Her record may have been even more impressive had she not been a victim of the East German boycott of the 1984 Games in Los Angeles, where she would have been favourite in all three women's kayak events.

For the first time, blood tests were mandatory in all events and 24 doping violations had been uncovered by the time the Olympic flame was extinguished - double the previous highest number at Los Angeles in 1984.

The Games of the 29th Olympiad get underway in Beijing, China on 8th August 2008, and a record 302 events will be contested in 28 sports. The 91,000-seater National Stadium, dubbed the Bird's Nest, will provide a spectacular arena for the athletics and football, and the dazzling, 17,000-capacity National Aquatics Centre, named the Water Cube, is another instantly-recognisable arena.

The quality of the venues provided by Beijing is unquestionable, but China's human rights record has been under scrutiny since Beijing was awarded the Games in 2001.

The Chinese government denied accusations that China had not fulfilled its promise to make improvements in the build-up to the Olympics, but film director Steven Spielberg withdrew as an artistic advisor to the Games, accusing China of not doing enough to pressure Sudan to end the "continuing human suffering" in the troubled western Darfur region.

London will welcome the Games back to Great Britain after a 64-year absence on 27th July 2012, and plans for an innovative Olympic stadium have already been announced. During the Games it will hold 80,000 people in a unique mix of temporary and permanent seating and afterwards it will be converted to a 25,000-capacity athletics stadium.

The English capital had to overcome stiff competition from Paris, New York, Moscow and Madrid to land the 30th Olympiad in Singapore on 6th July 2005. The London 2012 Organising Committee is being chaired by Sebastian Coe, a double Olympic champion and former Conservative politician.