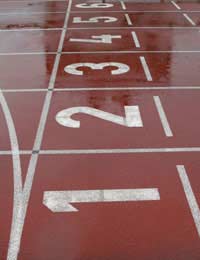 By the time of the first modern Olympic Games in Athens in 1896, the idea was already more than 100 years old. The French Revolutionaries had considered reinventing the Games on the Champ-de-Mars in Paris as early as 1792.

Greek poet Panagiotis Soutsos asked his government to revive the Games in 1835 and King Otto proposed a festival of art, industry, athleticism and agriculture, but nothing came of it.

In Wenlock, England, an Olympic committee was formed by Dr William Penny Brookes in 1840, and Olympic festivals were held from 1849 incorporating running, swimming, cricket, equestrian sports and dancing.

The Panhellenic Games were founded by Greek patriot Evangelis Zappas in 1859, but descended into farce in front of 20,000 spectators with old men, children and even a blind beggar participating.

Schoolboy Olympic Games had been running for 30 years in France by 1885 when Ferdinand de Lesseps suggested a revival of the Olympic Games in Paris. Georges de Saint-Clair developed the idea in 1888 and Communard Paschal Grousset, a writer and journalist, popularised it. The following year, at the Universal Exposition in Paris, national and international sporting competitions were set up. In 1890, Baron Pierre de Coubertin met Dr Brookes in Wenlock and the idea took shape.

Two commissions were formed - one to define amateur status, the other to work on the Games. It was agreed the Games would be held every four years, there would be no cash prizes, gambling was banned and, with the exception of professional instructors in fencing, only amateurs would be allowed to take part in the first Games in 1896.

The sports to make up the Olympic programme were selected as track and field athletics, gymnastics, cycling, rowing, sailing, shooting, swimming, fencing and equestrian sports. Athens, home of the ancient Games, was chosen as host for the first reconstituted Games and Paris was to host the 1900 Games during the Universal Exposition.

The International Olympic Committee (IOC) was formed, with wealthy Greek businessman Demetrios Vikelas as president. Charles Herbert, the honorary secretary of the Amateur Athletics Association, and Lord Ampthill, grandson of the British Minister for Foreign Affairs, represented the UK and were among 13 members in all.

De Coubertin, the biggest single driving force behind the reinvention of the Games, said: "Greek Olympism has re-entered the world after lying eclipsed for several centuries. The bringer of joyous hope will light up the 20th century."

Citius, Fortius, Altis - faster, stronger higher - was adopted as the Olympic motto. It had been the motto of de Coubertin's Committee for the Propagation of Physical Exercise in 1891.