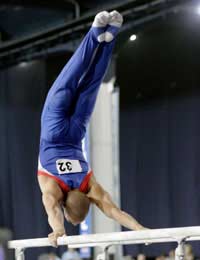 Gymnastics is one of the defining sports of the Olympics and has been present at every Games. The sport can be traced back to ancient Greece and similar disciplines were practised in ancient Rome, China, India and Persia, the aim being to prepare young men for battle. In those days the dress requirements for athletes were minimal and the word gymnastics is derived from the Greek word gymnos, meaning naked.

The early Games featured some unusual events, such as rope climbing, tumbling and club swinging, but the Olympic programme began to settle in 1924 and four years later in Amsterdam women began competing at the Games. Nowadays gymnasts require strength, agility, style and grace, and consistently provide many of the most astounding Olympic spectacles.

Even more remarkable than Comaneci's medal haul was the fact the she became the first gymnast in Olympic history to be awarded the perfect score of 10.0. It came on the uneven bars and the judges went on to award her the maximum mark seven times during the Games.

Four years later, in Moscow, Soviet Aleksandr Dityatin became the first male gymnast to achieve a perfect 10. It came in the vault as Dityatin won an incredible eight medals in one Olympic Games, including gold in the individual all-round, rings and team competition.

Rhythmic gymnastics is performed with an apparatus and accompanied by music. The gymnasts, all women, perform on a 13-metre-square floor with rope, hoop, ball, clubs and ribbon. There are two events: the individual all-round and a team competition. In the individual event, gymnasts perform routines with four of the five apparatus. In the team competition, teams of five perform together, once using clubs and once with three using ribbons and two using hoops.

Rhythmic gymnastics incorporates many positions and leaps derived from classical ballet, including pliés, jetés, attitudes and arabesques. It was recognised as an official discipline by the Fédération Internationale de Gymnastique (FIG) in 1962 and the individual all-around competition was introduced into the Games in 1984, with the team competition added 12 years later in Atlanta.

Trampoline gymnastics made its debut at the Sydney Games in 2000, featuring both men's and women's individual events. Russians, in the form of Alexander Moskalenko and Irina Karavaeva, took both gold medals.

Rules and Skills in Olympic Shooting and Archery
Share Your Story, Join the Discussion or Seek Advice..
Wish all the british team good wishes for medals in that wonderful arena in 2012.Would just love to be there to see you in action;Also would like some information about the gymnastic sculpture on a roundabout which is already in position near the O2, as I saw it from a bus and it does not feature in any of your internet information.It looked fantastic.
old model - 22-Sep-11 @ 4:12 PM
Title:
(never shown)
Firstname:
(never shown)
Surname:
(never shown)
Email:
(never shown)
Nickname:
(shown)
Comment:
Validate: