Rules and Format of Olympic Football 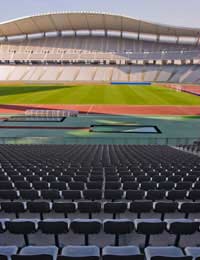 Football was the first team sport included in the Olympic Games when introduced for the 2nd Olympiad at Paris in 1900. With the exception of 1932 in Los Angeles, it has been part of every Games since.

The sport as it is known today began with the formation of the English Football Association in 1863, but the game’s roots can be traced to the ancient Chinese, Greeks and Romans, who all played a similar game long before English kings tried to outlaw the violent sport in the 14th and 15th centuries.

Great Britain dominated in the early tournaments – winning three of the first four – and European nations were denied victory only three times until 1992, when Spain became the last European team to win gold.

The strict amateur status of the early modern Olympics began to favour Eastern European countries in the 1950s. While the majority of top players throughout the world turned to the professional game, state-sponsored Eastern European players retained their amateur status. It resulted in Eastern European nations taking gold in all eight tournaments between 1952 and 1980. Hungary, winners three times, were the most successful.

At the 1984 Games in Los Angeles, professional players were admitted for the first time. Teams from Africa, Asia, the Caribbean, Central America, North America and Oceania were allowed to field their strongest professional sides, while European and South American nations were restricted to using players who had not played in a FIFA World Cup.

Since 1992, rules have restricted the men’s tournament - set at 16 teams - to players under 23 years old with the exception of three over-age players. Nigeria became the first African winners in 1996 and Cameroon took gold four years later in Sydney.

No Match for World Cup

Although football at the Olympics predates World Cup football by 30 years, it is a far inferior tournament. Olympic rules, initially governing amateur status and later age restrictions, have prevented the very best players in the world taking part in the Games. As a result, the Olympic football tournament has been outshone since FIFA’s showcase was introduced in 1930.

Football’s strongest nations have, on the whole, performed poorly at the Games. Brazil, World Cup winners a record five times and runners-up twice, have never won Olympic gold and Italy, winners of four World Cup tournaments, have taken the Olympic crown only once, in 1936.

Despite early successes, Great Britain no longer takes part in qualifying tournaments for Olympic football. The four UK nations – England, Scotland, Northern Ireland and Wales – have separate international identities within FIFA and are not willing to risk that status by coming together to compete as Great Britain at the Games.

Women’s football was added in 1996 at Atlanta and the USA have been dominant, winning gold in 1996 and 2004 and losing to Norway in the 2000 final. In 2004, the number of women’s teams increased from eight to 10, and in Beijing 12 women’s teams took part. No age restrictions apply for the women’s tournament.