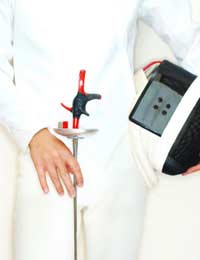 Fencing is one of the few sports to have been contested at every Olympic Games and was the first to allow professionals to compete for medals. Baron Pierre de Coubertin, the founder of the modern Olympic Games and second president of the International Olympic Committee, arranged ‘masters’ events for professional instructors at the 1896 and 1900 Games.

Originally a form of combat, fencing is depicted in Egyptian carvings that date from around 1190BC in the temple of Medinet-Habu near Luxor. Other ancient civilisations - including Babylonia, China, Greece, Japan and Persia - practised swordplay as training for combat.

Both Germany and Italy lay claim to the origins of fencing as a sport. German fencing masters organised the first guilds in the 15th century, and in 1570 Frenchman Henri Saint-Didier gave names to fencing’s major movements. Sword fights and duels, often bloody and occasionally fatal, were common from the 16th to the 18th century and a variety of weapons were used, including backswords, quarterstaffs and singlesticks.

Fencing grew in popularity as a sport in the 17th century when a light practice weapon was developed with a flattened or ‘foiled’ tip that was padded to reduce the risk of injury. The weapon was soon known as the foil. Rules were introduced to limit the target to certain areas of the body, and a wire-mesh mask was worn to protect the face.

Double hits – that is when both fencer score almost simultaneously – are allowed in épée and both fencers are awarded a point. But in foil and sabre, ‘right of way’ or ‘priority’ rules come into play, and only the fencer on the offensive, as deemed by the referee, will score.

Bouts are held on a 14x1.5-metre piste, or playing area. Fencers are connected to an electronic scoring system that indicates if a hit has occurred. Rivals stand opposite one another and lunge, feint, parry and riposte until one scores the required number of hits.

Each event has a direct-elimination format. Three fencers make up a team, and each one duels each member of the opposing team.