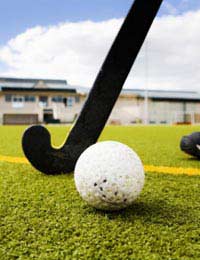 India produced one of the longest winning streaks in the history of the Olympic Games by winning six consecutive hockey gold medals between 1928 and 1956. They won 30 matches in succession and, although Pakistan took the Olympic crown in 1960, India regained it four years later in Tokyo and won it for an eighth time at the Moscow Games in 1980. Balbir Singh was one of the many stars of the India teams, scoring five times in the 6-1 win over Holland in the 1952 final in Helsinki.

Men's hockey made its Olympic debut in 1908 and has featured at every Games since 1920, while women's hockey was introduced in 1980. Australian midfielder Rechelle Hawkes is the only female hockey player to earn three medals and the only one to win medals 12 years apart. All of her medals are gold - won at Seoul in 1988, Atlanta in 1996 and Sydney in 2000. In addition, Hawkes was given the honour of reciting the Athletes' Oath on behalf of all the athletes at the Opening Ceremony in Sydney.

Both the men's and women's Olympic tournaments are now contested by 12 teams, which are split into pools of six for the preliminary rounds. The top two teams in each pool qualify for the semi-finals and the remaining teams play classification matches for fifth to 12th places. The semi-final winners play for the gold and silver medals, while the losers play for bronze.

Hockey is the oldest known ball and stick game, with evidence it was played in Persia in 2000BC. Canterbury and Gloucester cathedrals have stained-glass windows of men playing a game with hooked sticks in mediaeval Europe, and the sport became so popular by the Middle Ages that it was banned in England because it interfered with archery practice, the basis for national defence.

The game became more organised in the late 19th century and London's Blackheath Football and Hockey Club, which dates back to at least 1861, is considered to be the first hockey club.

Although the word hockey comes from the old French word hocquet, which means shepherd's crook and refers to the crooked stick used to hit a small ball, it was the British who developed hockey as a sport. The Amateur Hockey Association, the national governing body, was formed in London in 1886, and the National Hockey Union was located in the Bristol area between 1887 and 1895.

Hockey was then carried throughout the British Empire by the nation's armed forces and other workers, and so it is no coincidence that most of the dominant nations in the sport are, or were, members of the British Empire, including India, Pakistan, Australia, New Zealand and Great Britain. Other nations have made huge advances in recent times - Germany won the men's Olympic crown in 1992 and Holland landed back-to-back titles in 1996 and 2000 - and the game is now a truly worldwide sport. Until the 1970s, the game at international level was mainly played on natural grass, but it has become an even more exciting and skilful sport since the introduction of synthetic surfaces.