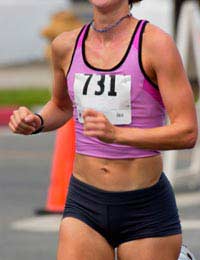 Triathlon is the youngest of all Olympic sports. It was invented by San Diego Track Club as an alternative workout, with the first known events held in 1974. The club's first triathlon comprised of a 10 kilometre run, 8km cycle and 500 metre swim.

Athletes must excel at three different pursuits - swimming, cycling and running - to master the triathlon, which is considered the ultimate endurance test. It means a demanding training schedule for those at the top of the sport.

Races are held over four different distances, named sprint, Olympic, long course and ultra. The Olympic triathlon comprises a 1.5 kilometre swim, 40km bike ride, and 10km run. Men will typically complete the course in around one hour 50 minutes, with women taking a little over two hours.

A mass start can lead to jostling for position during the swimming. Thereafter, the race is continuous and, as there are no stops between the three legs, changeovers from one discipline to the next are crucial to race strategy. Positions can change rapidly throughout the race, as athletes make up places during their stronger disciplines and fall back during weaker ones.

In 1989, the International Triathlon Union (ITU) was founded in France and the first official world championships took place. Triathlon made its Olympic debut at the Sydney Games in 2000, with Switzerland's Brigitte McMahon and Canada's Simon Whitfield, an outsider ranked 13th in the world, winning the first Olympic gold medals.

The pentathlon was held in high esteem by the Greeks during the ancient Games. When the sport was first held, at the 18th Olympiad in 708BC, it comprised of running the length of the stadium, jumping, spear throwing, discus throwing and wrestling. The winner was hailed Victor Ludorum, Latin for winner of the games.

The modern pentathlon was the brainchild of Baron Pierre de Coubertin, the founder of the modern Olympics. It was introduced at the Stockholm Games in 1912 and comprised of pistol shooting, fencing, swimming, horse riding and running. De Coubertin believed the modern pentathlon "tested a man's moral qualities as much as his physical resources and skills, producing thereby the ideal, complete athlete."

Shooting is the first discipline, and the pentathletes have 40 seconds to fire 20 shots from an air pistol at a 17cm-square target from 10 metres. A round-robin fencing competition follows and then a 200m freestyle swim. In the show jumping ring, lots are drawn to pair pentathletes with horses drawn by lot before a course of 15 jumps is tackled. The climax is a 3000m run with a handicapped start that takes into account points accrued in the first four events. The first athlete across the finish line wins gold.

Between 1912 and 1980 the competition was held over five days and various experiments with a four-day format took place between 1984 and 1992. The existing one-day format was introduced in 1996 and four years later an event for women was added. In Beijing, the field was increased to 36 men and 36 women.