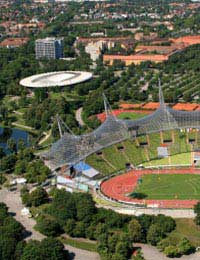 The first Olympic Games to be held in Asia were in Tokyo in 1964. The city had been selected to host the 1940 Games, but World War II had intervened. Yoshinori Sakai, an athlete born not far from Hiroshima on 6th August 1945 - the day the first atomic bomb was released - lit the Olympic flame in honour of the victims. A global audience watched the first worldwide television broadcasts via satellite, and a colossal budget of two billion dollars ensured the organisation was flawless.

In the pool, Australian Dawn Fraser won the 100metres freestyle for the third consecutive Games, taking gold in 59.5seconds less than seven weeks after a car crash that killed her mother and left her in a neck brace. American Don Schollander won an unprecedented four gold medals - the 100m freestyle (53.4secs), 400m freestyle (4:12.2), 4x100m freestyle and 4x200m freestyle.

On the track, Kiwi Peter Snell retained the 800m title he won in Rome and added the 1500m crown, while American Bob Hayes clocked a wind-assisted 9.9secs - the first run under 10secs - in the semi-final of the 100m and went on to clinch gold.

The introduction of a synthetic track and a Games held at an altitude of 2,240m led to a plethora of records at Mexico in 1968. Most remarkable of them all was, without doubt, the winning leap of 8.90m by Bob Beamon in the long jump. It demolished the world record by 55 centimetres.

Tommie Smith, winner of the 200m, and bronze medallist John Carlos, used their medal ceremony to protest against the conditions endured by black people in the USA. They raised gloved fists into the air as the American national anthem played and looked down instead of up at the US flag. The pair were later expelled from the Olympic Village by the Mexican Olympic Committee.

For the first time, winners had to undergo drugs tests and Swedish modern pentathlete Hans-Gunnar Liljenwall became the first drugs disqualification when he tested positive for excessive alcohol.

On Tuesday 5th September 1972, masked Palestinian gunmen forced their way into the Olympic Village in Munich. In the building housing the Israeli delegation, the gunmen took athletes and officials hostage and murdered two in cold blood. The terror culminated in a shootout at the airport, where the Palestinians had planned to escape with their hostages. Nine more Israelis, five Palestinians and a police officer were killed.

The African nations wanted New Zealand excluded from the Montreal Olympics in 1976 because the All Blacks rugby union team had toured South Africa, banned from the Games because of apartheid. When the International Olympic Committee refused, 27 African nations withdrew. The Canadian government revoked the visas of the Taiwanese to appease China, but the Chinese boycotted anyway in protest at the IOC admitting Taiwan.

Romanian gymnast Nadia Comaneci was the darling of the Games, even outshining queen of the Munich Games Olga Korbut. Comaneci achieved a perfect score of 10 on seven occasions and stuck gold in the individual all-round, asymmetric bars and balance beam, bronze in floor exercises and team silver.

Cuban Alberto Juantorena achieved an unprecedented double of 400m and 800m gold, the latter in a world record 1:43.50, while Finn Lasse Viren repeated the 5,000m and 10,000m double he had achieved in Munich.

Most of the capitalist world boycotted the first Olympics to be held in a socialist country, the 1980 Games in Moscow, following the Soviet invasion of Afghanistan. Only 81 countries took part - the lowest number since 1954.