World Records Achieved at the Olympics 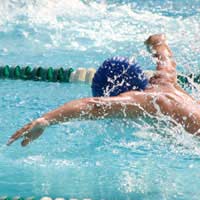 The high altitude of Mexico City, which is 2,240 metres above sea level, made the 1968 Olympics difficult for athletes in the endurance events. Yet the altitude, which meant the air contained 30 per cent less oxygen than at sea level, was an advantage in events that needed a brief but intense effort. As a result, a host of sprinting and jumping world records fell.

Other factors may have had a bearing too. The use of a synthetic material on the athletics track was a first, and, while events were timed both manually and electronically, for the first time the electronic time was the official one. Certainly, many of the records stood the test of time.

American Bob Beamon shattered the long jump world record by 55 centimetres with a leap of 8.90 metres and almost 23 years went by before Mike Powell bettered it. The USA 4x400m relay team of Lee Evans, Larry James, Ron Freeman and Vince Matthews cut 3.44 seconds off the world record with two minutes 56.16secs and it stood for almost 24 years until another USA team improved on it by 0.42secs at the Barcelona Olympics.

At the Munich Olympics four years later, Mark Spitz made a one-man assault on the record books. He broke seven world records on his way to the same number of gold medals - all within the space of eight days.

One of the most impressive world records of recent times was set by American sprinter Michael Johnson in the 200m at the 1996 Atlanta Olympics. Johnson had clocked 19.66secs at the US Olympic trials to shave six hundreds of a second off the 17-year-old world record set by Italian Pietro Mennea at altitude in Mexico City. In the Olympic final he ran a phenomenal 19.32secs to defeat Namibia's Frank Fredericks by four metres. The record still stands 12 years on.