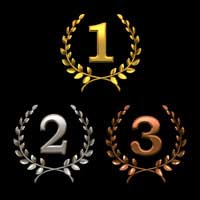 Champions of the ancient Games in Olympia were crowned with a wreath, cut from a sacred olive tree with a golden sickle, and statues were erected in their honour next to those of the Gods. The sporting heroes of the modern Olympics receive medals - gold, silver and bronze - and the names of all the medallists are engraved on the walls of the main stadium where the Games take place.

From the first modern Olympiad, in 1896, until the 1928 Games in Amsterdam, it was traditional for the medal presentations to take place during the closing ceremony. At Los Angeles, in 1932, the medals were awarded after each competition.

Designs change from Olympiad to Olympiad, but medals must be at least 60 millimetres in diameter and 3mm thick. The winner's medal is made of gold, using a minimum of six grams of fine gold, while the second and third-place medals are made of silver.

There is a long history of controversial medal ceremonies at the Olympics. At the 1936 Berlin Games, Korean marathon runners Sohn Kee-chung and Nam Seung-yong were forced to represent Japan under the Japanese names Son Kitei and Nan Shoryu because, at the time, their nation was occupied by Japanese forces.

Sohn, a fervent nationalist, always signed his Korean name in Berlin and, whenever asked where he was from, made it a point to explain that Korea was a separate nation. He won the gold medal, with Nam taking bronze, and at the medal ceremony Sohn had to endure the humiliation of having the Japanese flag raised and Japanese national anthem played to celebrate his victory. Sohn and Nam registered a silent protest by bowing their heads.

Sohn carried the South Korean flag in the opening ceremony of the 1948 London Games, and 40 years later in Seoul, aged 76, carried the Olympic torch into the stadium.

Another marathon man, Etienne Gailly, was a hero of the 1948 Games. The Belgian had never run a marathon before, but entered the stadium first. With barely a lap of the track to complete, his legs started to wobble and he slowed to a walk. He was overtaken by two rival athletes and fell to his knees on the home straight, but straightened up and staggered over the line to win bronze. His efforts put him in hospital and he missed the medal ceremony.

Briton Chris Brasher was first across the line in the 3,000 metres steeplechase at the 1956 Melbourne Games, but was initially disqualified for interfering with Norwegian Ernst Larsen. Brasher appealed and an anxious wait followed, as the jury did not meet until that evening's competition had concluded. When it did Brasher was reinstated, but the medal ceremony was postponed to the following day.

Brasher, much relieved, celebrated through the night and by his own admission was "blind drunk, totally blotto, with an asinine grin on my face" when he received his gold medal.

Medals were hung around the necks of the victors for the first time at the 1960 Rome Games. A chain of laurel leaves was used, although coloured ribbon is now more common. Four years later in Tokyo, the Japanese anthem was played at the medal ceremony for Ethiopian Abebe Bikila, the first man to defend the marathon title, because the band did not know the winner's national anthem.

At the 1968 Mexico Games, black American athletes Tommie Smith and John Carlos - gold and bronze medal winners in the 200m - made a racial protest during the medal ceremony. They raised a black-gloved fist and hung their heads while the USA anthem played to protest against racial segregation in the US. They were subsequently expelled from the Olympic Village.

Four years later in Munich, the USA lost a controversial basketball final to the Soviets 51-50. When the horn sounded to end the game the USA were 50-49 in front, but USSR coach Vladimir Kondrashkin convinced match officials he had called a time-out and no-one had heard him. Three seconds were added to the clock and, in the confusion, Aleksandr Belov rose unopposed to score the winning points. The USA protested, did not attend the medal ceremony and did not accept the silver medal.

The medal ceremony for the men's coxless pairs rowing event at the Moscow Games in 1980 may have had observers fearing they had double vision. Both the gold and silver medal-winning teams were identical twins. East Germany's Bernd and Jorg Landvoigt were first and Russia's Yuri and Nikolai Pimenov second.