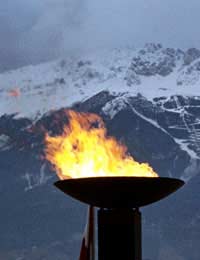 The Olympic flame is one of the most instantly recognisable symbols of the Games. Its origins date back to the ancient Games, from 776BC to 393AD, when a sacred flame burned at the altar of Zeus. It was not a part of the early modern Olympics.

The torch relay was based on an idea by Dr Carl Diem. A lighted torch was carried from Olympia to the site of the 1936 Games in Berlin through seven countries - Greece, Bulgaria, Yugoslavia, Hungary, Czechoslovakia, Austria and Germany. The total journey was more than 3,000 kilometres.

Now, some months before the opening of each Games, the Olympic torch is lit in front of the Temple of Hear on the grounds of Olympia, where the ancient Games took place. According to the traditional ritual, the flame is lit by a Holy Priestess using the sun's rays and a parabolic mirror. The priestess then enters the ancient Olympic stadium with the torch and hands it to the first runner of the torch relay. The runner passes by the tomb where the heart of Pierre de Coubertin, the founder of the modern Olympics, is buried, to begin the long journey.

At the 1964 Games in Tokyo, Yoshinori Sakaï, a student born not far from Hiroshima on 6th August 1945 - the day the first atomic bomb was released - lit the Olympic flame in honour of the victims.

In 1976, the Olympic flame arrived by air, as technology played a role in the torch relay for the first time. The sacred flame was electronically transmitted from Athens to Ottawa by satellite and from there runners transported it to Montreal.

Only a few days after the flame had been lit, it was extinguished by torrential rain. It was quickly reignited, thanks to a nearby official with a cigarette lighter, but this was considered a sacrilegious act. Luckily, organisers had kept a reserve flame, originating at Olympia, burning in case of an accident, and the impure fire was soon extinguished and replaced by a genuine Olympic flame.

At the 1988 Games in Seoul, the torch was run into the stadium by 76-year-old Sohn Kee-chung, the winner of the 1936 marathon. Sohn had been forced to enter the Berlin Games using a Japanese name because Korea was occupied by Japan.

Athlete Cathy Freeman had the honour to light the Olympic flame at the opening ceremony of the Sydney Games in 2000. It was a symbol of the desire to reconcile the white and Aboriginal populations of Australia. Ten days later, Aborigine medal hopeful Freeman won the 400 metres final before an ecstatic crowd.