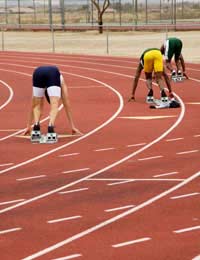 Some question the value of the Olympic gold medal won by Scottish sprinter Allan Wells at the Moscow Games in 1980. After all, the USA had boycotted the Games in protest at the Soviet invasion of Afghanistan in 1979, and most of the capitalist world followed the American lead. Only 81 countries took part - the lowest number since 1954.

But when Wells lined up in the final of the 100 metres, having improved his British record to 10.11 seconds in the second round, he was up against the second fastest man in history. Cuban Silvio Leonard had clocked 9.98secs in 1977 and only American Jim Hines, who won gold at the Mexico City Games in 9.95secs, had run faster.

The principal players could not have been drawn further apart in the final - Leonard was in lane one and Wells in lane eight. Wells settled in his blocks, something he had been forced to get accustomed to due to a rule change. Throughout most of his career he had competed without blocks. The 28-year-old was bidding to become the first British medallist in the event since Peter Radford had won bronze at Rome in 1960 and the first winner since Harold Abrahams in 1924.

Wells and Leonard sped away from the rest of the field and crossed the line together. They were given the same time - 10.25secs - but closer inspection showed Wells had won gold by the narrowest of margins, aided by a perfectly-timed lunge for the line.

The Scotsman improved his own British record to 20.21secs in the final of the 200m as he attempted to become only the seventh man to claim the Olympic sprint double, but he had to settle for silver, two-hundredths of a second behind Italian world record holder Pietro Mennea.

Linford Christie was banned for two years by the International Amateur Athletic Federation (IAAF) following a positive drugs test in 1999. A urine sample taken after an indoor race in Dortmund contained almost 100 times the permitted level of the anabolic steroid nandrolone. UK Athletics cleared Christie, stating it could not be proved beyond reasonable doubt that Christie had taken nandrolone, but the IAAF overruled the decision.

At the 1988 Olympic Games in Seoul, Christie ran a European record 9.97secs to finish third behind Canadian Ben Johnson and American Carl Lewis, but was upgraded to the silver medal when Johnson tested positive for steroids and was stripped of the title. Christie himself tested positive for the banned stimulant pseudoephedrine, but the International Olympic Committee accepted it could have come from the permitted substance ginseng and cleared him.

Christie has always insisted he is innocent of all wrongdoing. Nonetheless, a cloud hangs over an otherwise glittering career that peaked at the Barcelona Olympics in 1992. Bidding to become the oldest winner of the 100m at the age of 32, Christie got a better start than usual in the final. Starting was not his forte, but by 20m Christie was in touch with all the major contenders and by 60m he had started to power clear of his rivals. He won in 9.96secs, with Namibian Frankie Fredericks second, six-hundredths of a second behind, and American Dennis Mitchell third.

The following year, Christie set a European record 9.87secs to win the World Championships in Stuttgart and became the first man to hold the 100m Olympic, world, European and Commonwealth titles. The Jamaican-born sprinter, a Londoner since the age of seven, defended his Olympic crown in Atlanta but was disqualified after two false starts in the final.