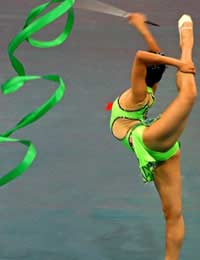 Nadia Comaneci was just 14 years old when she became the first gymnast in Olympic history to be awarded the perfect score of 10.0. The Romanian achieved the feat on the uneven parallel bars at the 1976 Montreal Olympics and went on to get the maximum mark another six times during the Games.

Four of Comaneci's 10s came on the uneven bars, two on the balance beam and one in the floor exercises. Famously, the scoreboards in Montreal were not able to display scores of 10.0, and the marks were shown as 1.00 instead.

The perfect performances were accompanied by a glut of medals. Comaneci won gold in the coveted all-round competition as well as the beam and asymmetric bars, and bronze in the floor exercises. Three of her 10s came in the team competition, but the Romanians still had to settle for silver behind the Soviets.

Comaneci returned to the Olympic arena four years later in Moscow, where she retained her beam title and won gold in floor exercises. Judges deliberated for 28 minutes after her final apparatus of the all-round competition and then awarded her 0.075 points less than she needed to equal the overall score of Soviet Yelena Davydova.

It was a controversial and angrily disputed decision in favour of the home gymnast. Comaneci was forced to settle for silver and won another silver in the team competition to take her tally of Olympic medals to nine - five gold, three silver and a bronze. That is not the abiding memory of Comaneci, however, and she admits: "Not many people remember how many medals I won, but they still remember that first perfect 10."

In November 1989, shortly after the Berlin Wall had fallen, Comaneci defected from Romania and settled in North America. In 1996 she married American gymnast Bart Conner, a double Olympic champion in 1984.

Before Comaneci arrived on the scene, Soviet gymnast Olga Korbut was the darling of the Games. The 17-year-old shot to prominence with a sensational routine on the uneven parallel bars as the Soviets took team gold at the 1972 Munich Olympics. "It was amazing. One day, I was a nobody, and the next day I was a star," she said.

Unlike Comaneci, who kept her emotions in check, Korbut wore her heart on her sleeve. She shared her joy with the audience during the team triumph and, two days later, in the individual all-round competition, wept openly with disappointment as she dropped out of medal contention.

Ironically, it was errors on the uneven bars that cost Korbut. She had led with two disciplines to go, but three mistakes resulted in a score of 7.5 and ended her challenge as teammate Lyudmila Turischeva struck gold.

Korbut regained her form and composure in time for the individual apparatus finals the next day and earned gold medals on the balance beam and in floor exercises and a silver on uneven bars.

Four years later, Korbut was outshone in Montreal by new teen sensation Comaneci, but won a fourth Olympic gold in the team competition and took her medal tally to six with a silver on the balance beam.