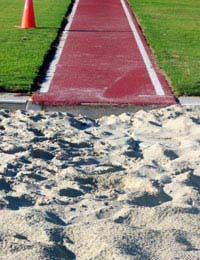 Jesse Owens is perhaps the greatest Olympian of all. The black American won an unprecedented four track and field gold medals at the Berlin Games in 1936. He achieved the feat under the steely glare of the Führer Adolf Hitler, who had wanted Germany's first Olympics to demonstrate Aryan racial superiority. By the end of the 1936 Games, the people of Berlin had rejected the Nazi propaganda and hailed Owens as their hero.

It was not the first time Owens, the son of sharecroppers and the grandson of slaves, had overcome racist bigotry. While at Ohio State University, he had been forced to live off campus with other African-American athletes and, when he travelled with the team, Owens had to eat at 'blacks only' restaurants and sleep in 'blacks only' hotels.

Two months before the Games, Owens added the 100m world record to his collection. His time of 10.2secs stood for 20 years. More records fell as Owens, born James Cleveland Owens on 12th September 1913 in Oakville, Alabama, chased gold in Berlin. He won the 100m in 10.3secs, lowered the 200m Olympic record to 21.1secs in the heats and then went 0.4secs faster to win the final, and won the long jump with 8.06m, an Olympic record that lasted 24 years.

The decision of Avery Brundage, president of the US Olympic Committee, to pick an all-white team for the 4x100m relay looked to have robbed Owens of the chance of a fourth gold medal. However, the threat posed by the Dutch team forced the Americans to rethink, so Owens and Ralph Metcalfe, runner-up in the 100m, were included alongside Frank Wykoff and Foy Draper. The USA, with Owens running the leadoff leg, won in 39.8secs, a world record that stood for more than 20 years.

One athlete who can legitimately lay claim to the title of greatest Olympian ahead of Owens is the man who emulated him 48 years later. Carl Lewis, inspired by Owens' granddaughter carrying the Olympic torch into the stadium during the 1984 opening ceremony in Los Angeles, matched what Owens had achieved in Berlin.

Four years later in Seoul, Lewis retained his 100m title in a world record 9.92secs after Canadian Ben Johnson had been disqualified for drug use, and also his long jump title with a leap of 8.72m. He took silver in the 200m. At the Barcelona Games in 1992, the America won a third long jump title, defeating world record holder Mike Powell by 3cm with 8.67m, and regained the 4x100m relay title with Michael Marsh, Leroy Burrell and Dennis Mitchell in a world record 37.40secs.

His ninth and final Olympic gold medal came with a fourth consecutive success in the long jump, thanks to an 8.50m leap in Atlanta. Lewis is one of only four Olympians to win nine gold medals - the others being Finnish distance runner Paavo Nurmi, American swimmer Mark Spitz and Soviet gymnast Larisa Latynina - and one of only three to win the same individual event four times alongside American discus thrower Alfred Oerter and Dane Paul Elvström, a single-handed dinghy sailor.