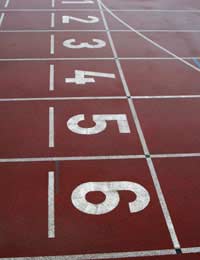 The five gold medals won by American sprinter Michael Johnson are an indication of how good an athlete he was, but so too are his world records for 200 metres and 400m. Both records remain intact and no-one is close to threatening them.

"I don't spend any time thinking how long they are going to last," said Johnson. "Records are meant to be broken and I actually hope I will be there to witness it when they do go because it will be a fantastic athletic performance."

Johnson's times are so good that he may have to live to be a very old man to get his wish and see his records fall, but it will not be the first time he has been forced to wait. At the 1992 Olympics in Barcelona, Johnson was the overwhelming favourite to win the 200m but contracted food poisoning 12 days before the opening ceremony and did not recover quickly enough. He was eliminated in the 200m semi-finals, and a gold medal in the 4x400m relay alongside Quincy Watts, Steve Lewis and Andrew Valmon was scant consolation, even though it came in a world record two minutes 55.74 seconds.

Four years later in Atlanta, Johnson's wait for an individual Olympic gold medal came to an end. Johnson, the first man to be ranked number one in the world at both 200m and 400m, had not been beaten at the longer distance in seven years, winning 54 finals in succession. In Atlanta he claimed gold in an Olympic record 43.49secs and finished 10 metres clear of Britain's Roger Black, his nearest rival. It was the largest margin of victory ever in the event.

He surpassed the achievement three days later in the 200m final. Johnson had clocked 19.66secs at the US Olympic trials to break the 17-year-old world record of Italian Pietro Mennea by six hundreds of a second. In the Olympic final he ran a phenomenal 19.32secs to defeat Namibia's Frank Fredericks by four metres. The record still stands 12 years on.

In 1998 at Uniondale, Johnson, Jerome Young, Antonio Pettigrew and Tyree Washington set a world record of 2:54.20 for the 4x400m relay and, the following year in Seville, Johnson took the 11-year-old 400m world record of fellow American Butch Reynolds, improving it by 0.11secs to 43.18secs. Both world records still stand.

"I had been chasing the 400m record for nearly 10 years and it all came right in Seville," said Johnson, who clocked 21.22secs for the first 200m and 21.96secs for the second. At the 2000 Games in Sydney, Johnson became the first man to win the 400m twice, finishing 0.56secs clear of fellow American Alvin Harrison in 43.84secs. It was no surprise, as Johnson had taken 400m gold at the previous four World Championships. He then teamed up with Harrison, Pettigrew and Calvin Harrison to win his fifth Olympic gold in the 4x400m relay.

Johnson won nine gold medals at World Championships. In addition to his run of successes in the 400m, he won the 200m twice and was in three successful 4x400m relay teams.