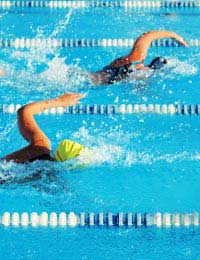 When freestyle swimmer Rebecca Adlington won the 400 metres in Beijing, she became the first British woman to claim an Olympic gold in swimming since Anita Lonsbrough won the 200m breaststroke in Rome 48 years earlier. When she won her second gold medal of the Beijing Games in the 800m, Adlington – at the age of just 19 – became the most successful British swimmer of the last 100 years.

As if those achievements were not momentous enough, Adlington smashed swimming’s longest-standing world record in the process. The teenager clocked eight minutes 14.10 seconds to win the 800m, slicing 2.12secs off the previous best set by American Janet Evans at Tokyo in 1989 – the year Adlington was born.

The 400 metres final could not have been much closer. Adlington judged her late surge to perfection to edge out American Katie Hoff by just seven one-hundredths of a second and win in 4:03.22. Her British team-mate Jo Jackson took the bronze medal in 4:03.52.

By her own admission, Adlington is not a natural sprinter, so it was perhaps not too much of a shock to find her trailing in last place at the 150m mark. She had climbed into sixth place by halfway and the whole field was separated by only 0.55secs.

Nevertheless, with 50m left a gold medal looked out of the question for Mansfield-born Adlington. She turned in fourth place, a massive 1.46secs behind Hoff, but powered through the water to cover the last length of the pool in 29.18secs and take gold. Italian Federica Pellegrini, the world record holder, had set an Olympic record of 4:02.19 in the heats the previous day, but could manage only fifth place in the final in 4:04.56, and France’s Laure Manaudou, the world champion, was eighth.

Adlington had an extra burden in the 800m final – the weight of expectation. In her heat two days earlier, Adlington had set an Olympic record of 8:18.06, slicing 1.61secs off the mark set by American Brooke Bennett at Sydney in 2000. That, combined with her victory in the 400m, saw Adlington start the 800m final as firm favourite.

If the level of expectation affected Adlington, it did not show. She trailed Camelia Alina Potec after 50m and shared the lead with the Romanian at the 100m mark. Adlington was never headed again, however, and powered clear in the second half of the race to destroy the field and the world record.

Silver medallist Alessia Filippi of Italy was a massive 6.13secs behind Adlington, with Denmark’s Lotte Friis, the bronze medallist, a further 2.8secs back. The winning time was so good it surprised even Adlington. “I didn’t expect that record at all,” she said afterwards. “It has always been a goal of mine but I never really expected it at this moment in time.”

The two gold medals won by Adlington in Beijing meant she equalled the best performance by a British woman at a single Olympic Games, matching athlete Kelly Holmes, who won the 800m and 1,500m on the track at Athens in 2004.