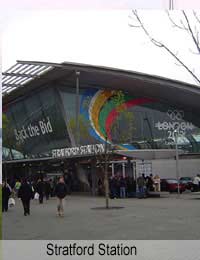 Organisers believe the London 2012 Olympic and Paralympic Games should not only be remembered for a summer of fantastic sport, but also seen as a catalyst for long-term benefits across the United Kingdom.

The Games offer the chance to regenerate one of the most underdeveloped areas in east London, and the aim is to transform the Lower Lea Valley for those that will live, work and play in the area after 2012. While the Olympic Delivery Authority (ODA) is preparing the Olympic Park and the surrounding area for the Games, the London Development Agency (LDA) is planning how the park will be used after the Games.

New parklands in east London will provide over 100 hectares of public open space after the Games and, as well as providing an area for local residents and visitors to enjoy, the parklands will host sporting, social and cultural events. The area will include 45 hectares of new habitats for wildlife, including wetlands, woodlands and grasslands.

The 52 overhead electricity pylons that dominate the skyline in and around the Olympic Park are being taking down and the powerlines between Hackney and West Ham substations are being moved to two six-kilometre tunnels that have been dug under the Olympic Park. Also, a new energy centre and primary substation are being built at Kings Yard in the west of the Olympic Park to provide efficient power, heating and cooling systems for local communities and businesses in the area after 2012. A new wind turbine at Eton Manor in the north of the park will contribute renewable energy.

The Olympic Village, which will accommodate thousands of athletes and officials during the Games, will be transformed afterwards to provide 3,000 homes, education facilities, healthcare and multi-use community facilities, parks, public squares and open spaces. This will form part of the Stratford City regeneration scheme, which also includes new retail, leisure and office developments.

World-class sporting venues, including the Olympic Stadium, Aquatics Centre, and VeloPark will offer facilities for elite athletes and the local community after the Games, inspiring future generations to take part in sport.

More than 30 new bridges will be built to span the rivers and railway lines that run through the Olympic Park and surrounding area. While some of these bridges, which are mainly pedestrian, are temporary structures to carry large numbers of visitors during the Games, many are permanent new bridges that will create new connections across the park and new links between local communities after 2012.

One of the most poorly connected areas of London will be transformed into one of the best connected thanks to the Games. Improvements to the Underground, rail, and the Docklands Light Railway (DLR) will see a trebling of the capacity, increase accessibility at Stratford Regional Station and extend the DLR under the River Thames to Woolwich Arsenal.

The road and path network provided for the Games will form the basis for the pedestrian, cycling and road network in the park afterwards, and by hosting a ‘public transport’ Games, London 2012 wants to change people’s attitudes to travel and encourage them to use environmentally sustainable and active transport, such as walking and cycling, to get to major events in the future.