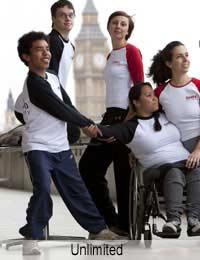 The Cultural Olympiad is more of a marathon than a sprint. It began in September 2008, aiming to put culture at the heart of the Games, encouraging participation and celebrating the cultures that make up the United Kingdom.

That first open weekend featured 655 events including films, music, festivals, arts performances and workshops, and the Cultural Olympiad will continue until the final few days before the London 2012 Olympic Games opening ceremony. The aims are to:

The founder of the modern Olympic Movement, Pierre de Coubertin, called the Olympics “the wedding of sport and art”, and London 2012 has embraced this belief by bringing sport and culture together.

Hundreds of projects are already under way, among them a series of major ones. ‘Artists Taking the Lead’ involves 12 projects that won commissions totalling £5.4million. These will create new works of art across the UK – one in each of the nine English regions, and in the nations of Scotland, Wales and Northern Ireland. The commissions will be developed across 2010, and come to fruition between 2011 and 2012.

‘Discovering Places’ explores both iconic and undiscovered urban and rural sites across the UK through a series of open days, participation and performance events from 2010 onwards. It culminates with a series of events animating the route of the London 2012 torch relay.

‘Film Nation’ will celebrate film’s ability to offer a window on the societies and cultures of the UK, while ‘Somewhereto’ allows people under the age of 24 to use space on their own terms, whether it’s to dance, set up a band, play sport, show films or create works of art.

Stories Of The World

‘Sounds’, being led by the BBC, is a major music programme that will showcase and celebrate the sounds of the UK in 2012, and through ‘Stories of the World’ people of all backgrounds, from every part of the UK, will become 'curators' of the collections and objects held in more than 50 museums, libraries and archives. They will have the chance to come up with new ways of representing material, and then put on their own series of exhibitions.

‘Unlimited’ celebrates disability, arts, culture and sport on an unprecedented scale, while the ‘World Shakespeare Festival’ will celebrate Shakespeare through a series of international collaborations.

It is hoped the benefits of the Cultural Olympiad will carry on long after the 2012 Games close. These include a new awareness of the cultural activity that goes on in the UK, new opportunities and projects to be involved in, and new cultural partnerships in the UK and around the world.