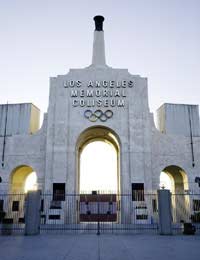 Los Angeles Memorial Coliseum is the only stadium to have hosted the Olympic Games twice. That is remarkable enough in itself, but the fact that these Olympics were over 50 years apart – in 1932 and 1984 – makes it quite astonishing. The same venue has also hosted two American Football Super Bowls and a baseball World Series.

Work on the stadium, designed by John and Donald Parkinson, began in December 1921 and was completed in May 1923. It opened its doors to the Los Angeles public the following month and the first American Football game was played in the stadium on 6th October 1923, with the University of Southern California hosting Pomona College before a crowd of just 12,836. It was a modest beginning for such a prestigious venue.

The original cost of less than 1million US dollars seems ludicrously low by today’s standards, but that bought a lot of stadium in the early 1920s. The Los Angeles Memorial Coliseum is 316 metres long, 225m wide, 36m tall and covers 17 acres. The original capacity of 76,000 was expanded to 101,574 for the 1932 Los Angeles Olympics in a renovation that cost as much as the original construction.

There are 15 arches at the Peristyle end of the Coliseum and the centre arch, which houses the Olympic torch, is six metres wide and over 13m high. Between the arches are plaques recognising many of the memorable events and participants in Coliseum history, including a full list of 1932 and 1984 Olympic gold medallists.

The Olympic torch, originally built for the 1932 Olympics, is 46m above ground level and 55m above field level. The torch, or cauldron, is now ignited by the flip of a switch in the Coliseum scoreboard control room, and is still lit during the fourth quarter of USC American Football games and on special occasions, such as when the Olympics are being held in another city.

In 1932, the Coliseum hosted the opening and closing ceremonies and track and field at the 10th Olympiad, which marked the introduction of the Olympic village as well as the victory podium. On 27th July 1984, the day before the opening ceremony of the 1984 Olympics, the Coliseum was declared a US National Historic Landmark.

Sculptor Robert Graham created a ceremonial gateway for the Coliseum when the Games returned to Los Angeles for the 23rd Olympiad. The gateway featured two life-size, nude, bronze torsos – one male and one female. Graham modelled the torsos on American water polo player Terry Schroeder and Guyanese long jumper Jennifer Innis, both of whom participated in the Games. The gateway was a major design element of an Olympiad noted for its lack of new construction, and the nudity of the torsos became an issue in the media.

With the Coliseum hosting Games so far apart, it witnessed athletes from entirely different generations. There were outstanding achievements at both Games nonetheless and home-grown heroines and heroes. American swimmer Helene Madison was a triple gold medallist in 1932 and 52 years later track and field star Carl Lewis went one better with four golds.