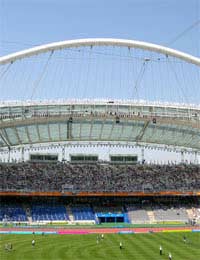 In the run-up to the 2004 Olympic Games, the Athens Olympic stadium was a symbol of the problems that dogged the Greek city’s preparations. An ambitious glass and steel roof, the brainchild of internationally-renowned Spanish architect Santiago Calatrava, led to delays and held up other work on the stadium.

In 1997, Athens had won the right to stage the Olympics, but three years later came an International Olympic Committee (IOC) warning that the delay-stricken city risked losing the event. From then until only weeks before the opening ceremony, Athens was the target for constant criticism.

The stadium itself had a long history of hosting football and major athletics events, having been designed in 1979 and built in time to host the European Athletics Championships in 1982, but underwent a dramatic facelift. Calatrava’s roof structure, a 18,000 tonnes, £124million glass and steel dome over the main Olympic stadium, was meant to be in place by the end of April, but fell well behind schedule. There were delays in putting the two roof arches into place, and final preparations continued into the weeks before the opening ceremony on 13th August.

The only test event – the Greek national championships – was staged in June and went off without a hitch, even though the area around the stadium was still rubble. Aktor SA, Greece's largest construction company and the leader of the construction joint venture charged with building many of the Olympic facilities, did not hand over the Olympic stadium to the Athens 2004 organising committee until 6th August.

So Athens had won its race to deliver the 2004 Olympics. There had been some anxious moments along the way, but the IOC’s warnings to speed up work had been heeded. The 72,000-seat stadium, also known as the Spiridon "Spiros" Louis Stadium after the winner of the first modern Olympic marathon in 1896, went on to host the opening and closing ceremonies, athletics and football.

The stadium roof, a highly complex construction that incorporates the world’s largest single span arch of approximately 305 metres long, dominates the city skyline and created a signature image for the 2004 Olympics.

Aktor managing director Dimitrios Kallitsantsis explained the unique construction problems developers had faced during the race against time in Athens. “The sheer scale of the event and the use of dynamic design and architecture bring a unique set of issues and challenges. Some can be anticipated, but, by its very uniqueness, some cannot."

”Athens is an ancient city. Any responsible developer is acutely aware of the problems associated with dealing with both an archaeologically and tectonically sensitive site. Prior to our instruction, the authorities had to deal with a number of unexpected delays, associated with site acquisition, securing the necessary consents and fulfilling all statutory archaeological requirements of the Attica region."

“Specifically, for the stadium, this meant that the time left available for the development process was less than originally anticipated. We were finally instructed to start building the Olympic facilities at the beginning of 2003.”